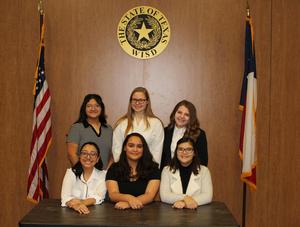 A new resource for law enforcement has hit the shelves virtually and is a first of its kind at Waxahachie High School.

Criminal justice teacher Joe Herrera wanted to push the boundaries of the career cluster to incorporate something fresh. The students of the criminal justice department, which has been in place since 2014, have created their first-ever newsletter, “The Scales of Justice.”

The students felt it was essential to produce content for their peers and teachers because not everyone is familiar with the positive side of law enforcement.

Some of the student-writers sat down and talked about their inspirations to get involved in criminal justice and explained what they contributed content-wise.

Van Huss is responsible for writing recaps and news about the student organization that corresponds to the career cluster — Texas Public Service Association. In her front-page story, she tells the story of her peers advancing to the state competition.

“My mother is a paralegal and always says she enjoys working in the field of law, and I picked up on it and watch crime shows. It interests me.”

Her contribution to the newsletter is different statistics that revolve around criminal justice.

“When I was little, I always knew I wanted to do something with law. When I was younger, I couldn’t pinpoint it, but now I know I want to be a lawyer, but I know it takes a lot of hard work through the years.”

She and her peers interviewed Detective Wilmont and conducted an interview with the new director of security. “We were asking questions during the interview, and everyone was writing notes in case someone messed up, and we had a tape recorder, recording, and we took pictures. So, I think we were really prepared for that one.”

“I question a lot of things, and my teachers said I should be a lawyer. I used to live in California, but I lived three hours away from Mexico. When we were crossing, I would wonder every time what they had to do. The border patrol interested me.”

Gonzalez is responsible for writing about different laws coming into effect and also writes about random, bizarre obsolete laws with a comedic twist. In the first issue, she wrote about the adverse effects of vaping.

“I was adopted, and I wanted to know what the process was behind social work, but now I’m more interested in corrections based on my classes.”