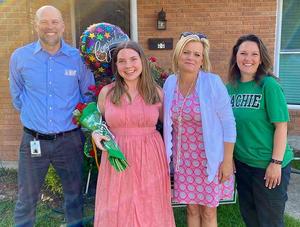 The 2020 Waxahachie High School salutatorian will one day perform surgery and save lives. Caitlin Richardson's grandfather was a surgeon and is the whole inspiration behind her selection of studies in college.

Even as a kindergarten student, Richardson envisioned herself performing surgery as she played with the doctor kits gifted to her by grandfather.

"I've always enjoyed helping people, and everything just clicked, and I love science," Richardson explained. "I kept with it and know it's what I want to do."

Richardson plans to major in biology and take the pre-med route at the University of Texas and then pursue medical school.

Richardson is a goal setter and is proud to achieve her goal of graduating second in her class.

"For me, it's all the hard work, the aspirations I set to achieve at the end of my senior year," she explained. "It's been really nice for it to happen. To be salutatorian was a big goal I set for myself, and it's amazing that I've been able to reach it."

Involvement in her school and community was vital to her. She knew as a freshman that she wanted to make a difference but was not sure how. Figuring out to balance extracurriculars and academics was tricky in itself.

If she could have given herself any advice as a freshman, it would be to get out of her shell quicker so she could make a difference sooner. Richardson realized this while completing the recycling project she independently spearheaded her sophomore year. After she got school board approval, she raised money for recycling bins at Lumpkins Stadium.

Richardson played soccer her first two years of high school and participated in the band program all four years. She played the clarinet in the concert band, marched three years with the Wind Ensemble, and served as drum major her senior year. She served all four years with the student council as an officer, finishing her senior year as senior class president. One club that was special to her was Interact, where her favorite activity was the annual Trick-or-Treat So Kids Can Eat event. She participated in Interact since her sophomore year and served as the vice president her senior year.

"The community service we did was really inspiring just to see what a group of kids can do from the high school," Richardson said.

She was also a member of the National Honor Society and competed in academic UIL.

Her senior year was the year of no regrets, which meant participating in high school theater and UIL One-Act Play.

"I wouldn't change it for anything — even to be valedictorian," she emphasized.

Richardson noted her unique high school career as she bounced around educational facilities from the Ninth-Grade Center, the former high school, and then at the current high school. As she had to physically transition to other campuses, the end of senior year was nothing but a transition.

"If I could say anything to my class, it's: It's okay," she began. "We have been through a lot and going into things blind, nobody has had to deal with this. And we were the class that was chosen to overcome a virus and overcome everything being thrown at us."

She continued, "It's okay to be upset and know that this is not fair — it's not fair that our parents get to watch us not have things they loved about senior year of high school. But, we are going to overcome this and come out stronger. We are the future leaders, and we will definitely take over the world with this new perseverance that we've had to learn in this experience."