Lady Indian Softball hits a grand slam for the community 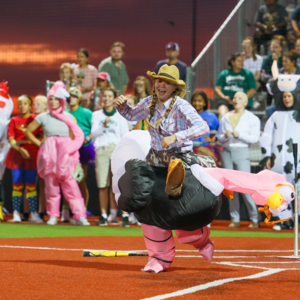 The Waxahachie Lady Indian Softball Booster club hit a grand slam with its first-ever Softball Vs Baseball game and Tent or Treat event.

Admission to the “spooktacular” event was five canned goods to benefit Waxahachie CARE. In total, players and parents collected over 1,200 pounds of canned goods for the community.

Celebrity coaches were invited by the senior players for the game. For the boy's team, “Coach” Conrad Bates held the line-ups; meanwhile, for the Lady Indians, “Coach” John Hoard made sure the girls were in top shape for the game. The umpires for the game were none other than Waxahachie High School’s Randall “Blind as a Bat” Buck and “Princess” Tonya Harris.

A game of backward ball was played with runners running the bases in the opposite order as well as batters hitting from the opposite side. The kids in the crowd got involved with games in between innings for candy prizes. The game was a fun event for all who attended — young and old. The game went back and forth, but the outcome was a win for the Lady Indians in the inaugural year of the event.

Following the event was a Tent or Treat hosted by the players and parents. The softball program extended a special thanks to the Cherokee Charmers for helping with the concession as well as the collection of the canned goods.